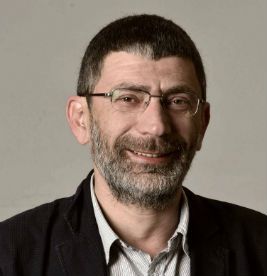 Ali Bizden was born in Nicosia in 1972. He is graduated from Ortaköy Primary School, 20 Temmuz High School, completed his graduate studies in Ege University-Faculty of Communication and his postgraduate degree in Ankara University- Social Sciences Institute, Department of Journalism.

In 1995-1996, he was the Chairman of the University Representative Council.
In 1996-1999, he worked as an assistant at Gazi University, Faculty of Communication, Press and Publication Techniques Department.

He completed his master’s thesis in 2000 on “Political Rituals and Media in building Collective Identities” in Ankara University, Social Sciences Institute.
He was among the founders of the Movement for Peace and Democracy.
He resigned from his assistant position at Gazi University, Faculty of Communication and returned to Cyprus.

He was a columnist in Cyprus, Yeni Düzen, Ortam, Kıbrıs Postası and Havadis newspapers and produced and presented a program called Party Time in Radio Havadis.

In 1999, he established Söylem Public Relations and Advertising Agency, in 2008 Söylem Printing Services and in 2012 Söylem Publications.

In 2000, he started working as a lecturer at the Faculty of Communication at Near East Univeristy. At various times, he acted as a representative of Public Relations and Promotion Department and Dean Coordinator.

In 2006, he was the President of the Advertising Union.

He is the writer of the book called ‘Partizan’.

Ali Bizden is married and has two daughters, named Başak and Burçak.